The Kankakee Valley Airport Authority was formed in 1957.  The location of the airport was chosen South of Kankakee in 1959.  The Greater Kankakee Airport has been officially serving the Kankakee community since 1962.  It is located 50 miles south of downtown Chicago and 70 miles north of Champaign, directly along Interstate 57 at the 308 exit.  The airport is home to over 100 private hangars housing helicopter, single engine aircraft, ultralights, and turbine powered aircraft.

In 1966 the main runway was expanded, successfully attracting a commercial carrier.  Air Wisconsin, Inc. began operating in 1967.  Commercial and freight service was available to Chicago, as well as Milwaukee, Appleton, and Wassau, Wisconsin.  Due to the commercial operations the Airport was able to build the terminal building in 1968, which is still standing today.

The Greater Kankakee Airport made its Hollywood debut in the 1980 Steve McQueen movie “The Hunter,” in which Ralph “Papa” Thorson comes to pick up the Trans Am at the airfield.

The Greater Kankakee Airport has received recognition over the years for its outstanding service to Kankakee County.  The airport has been awarded the General Aviation – Publically Owned Airport of the year award by the Illinois Division of Aeronautics in 2001 and 2012.

The airfield continues to serve the community today though general aviation.  Over 100 private tenants and multiple businesses continue to utilize the field.  In September of 2013 the Army National Guard broke ground on the Army Aviation Support Facility, which will be completed in 2017.  The facility will house 13 UH-60 Blackhawk helicopters.  The Kankakee Valley Airport Authority looks forward to continue to support the surrounding area in the years to come. 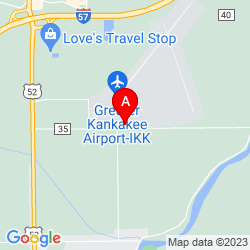